The second-largest living animal in the world

The Fin Whale is the second-largest living animal in the world, with only the Blue Whale exceeding them in size. This species has a very streamlined appearance and are slightly slimmer than Blue Whales. Their dorsal fin averages around 2 foot tall, which is followed by a prominent ridge along their back. This whale is gray in color on the upper surface and white on its belly, with identifying chevrons behind the head, starting at their blowholes and curving down towards their flukes. Fin whales are the fastest of all cetaceans, and can reach speeds up to 22 miles per hour. Although they do not typically exhibit breaching behaviors, there have been documented accounts of Fin Whales breaching completely out of the water, despite being over 70 feet long!

The Fin Whale can grow to over 80 feet in length and weigh in around 40-80 tons! These migratory whales are found in deep offshore waters worldwide, but are seen primarily in polar and temperate latitudes. Like other baleen whales, Fin Whales feed on zoo plankton using their baleen to filter out these small creatures. Fin Whales migrate south to warmer, temperate waters for mating and giving birth in the winter months. During times of migration to and from polar regions, Fin Whales are seen predominantly in pairs or small pods. 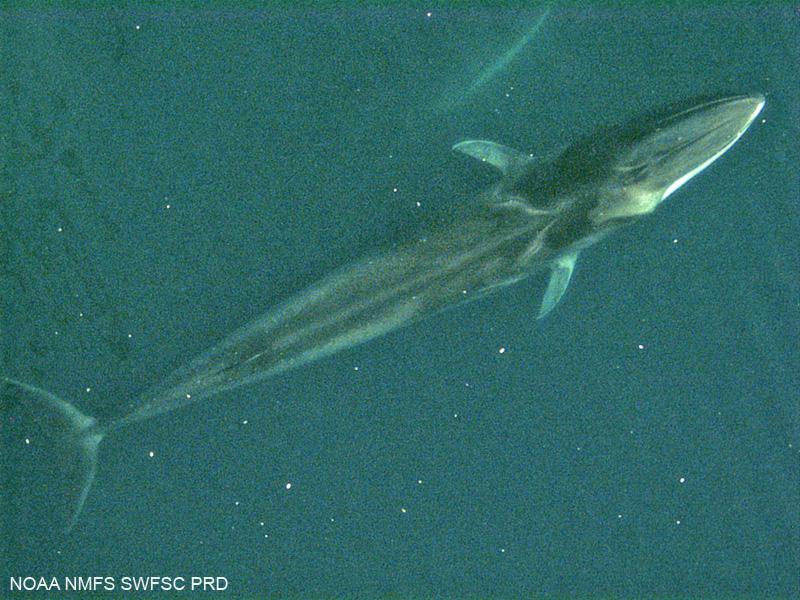 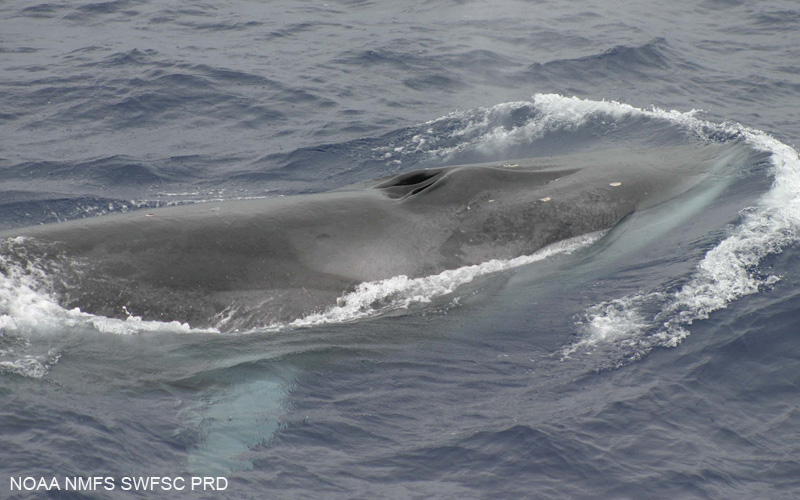 Identifying Characteristics of the Fin Whale 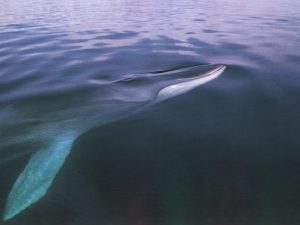 During the summer, Fin Whales feed on krill, small schooling fish and squid by circling schools of prey at high speed, then turn on their right side with their mouth open, using their 50-100 accordion-like throat pleats to engulf large quantities of food and water. They can consume up to 4,000 pounds of food daily, mainly because of the throat grooves located on the bottom jaw, which can expand greatly to hold the large quantities of krill and water.

Male Fin Whales become sexually mature around 6-10 years of age with females reaching sexual maturity between 7-12 years old. Physical maturity in both sexes is reached around 25 years of age. Gestation is 12 months and calves are born for each female normally in three year intervals. At birth calves are around 18 feet long and weigh around 5,000 pounds. Calves usually nurse for 6 months and are weaned when they are approximately 35 feet in length. These whales can live up to 80-90 years and it is thought there are resident populations of these animals in the East China Sea, Mediterranean Sea, and even right here in the Gulf of California!