The largest animal to have lived on planet Earth

A prime example of a rorqual, this baleen whale is the largest animal to have ever lived on planet Earth. Blue Whales can reach up to 100 feet in length and full grown adults can weigh up to 180 tons; as much as a single-story house! It is uncommon to see these massive creatures near the shores of Cabo San Lucas, making every sighting a spectacular event. These whales project a blue to silver coloration when seen underwater, although upon closer investigation, the skin is a gray-blue color with very unique mottling patterns. These pigmentation patterns can be used to identify individuals in a population.

The overall body shape of the Blue Whale is streamlined, except for ventral grooves which allow the mouth to greatly expand in size during feeding. From above, blue whales possess a flat, broad head, with a prominent single ridge which runs from the tip of the rostrum to the high splash guard. Only a few thousand Blue Whales remain in the world’s oceans today. In the early 1900’s they were hunted heavily for their blubber and were almost hunted to extinction, seeing this endangered giant is every whale watcher’s dream! 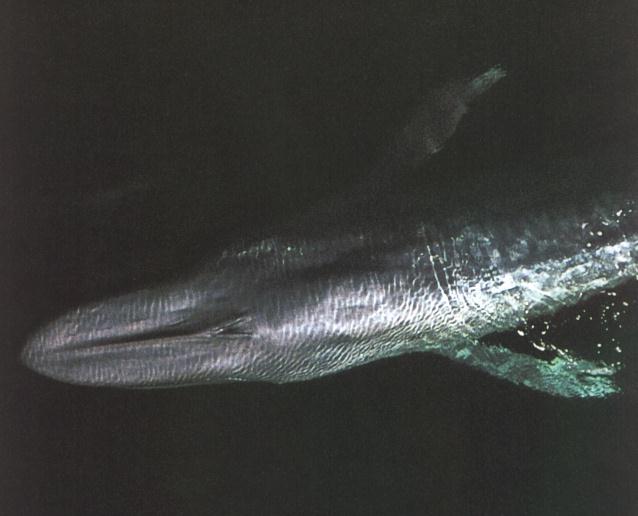 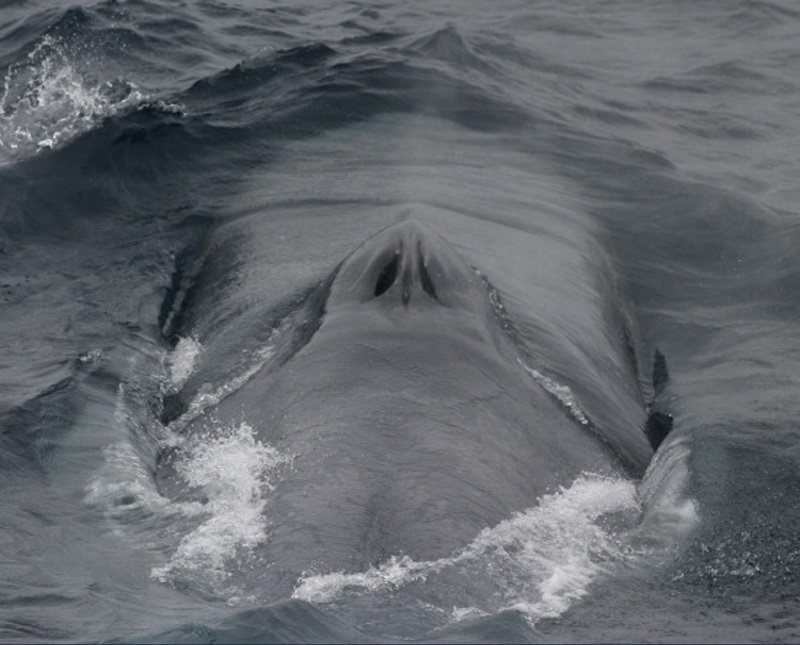 Identifying Characteristics of the Blue Whale:

Blue Whales are found worldwide, and are separated into three distinct populations. In the summer, whales of the eastern Northern Pacific population feed on krill and other zoo plankton which blooms off the U.S. coast, while some migrate as far as the Aleutian Islands. They then make their winter migration to waters off the coast of Mexico and often up into the Gulf of California. These areas are most likely vital calving and nursing grounds for this population of Blue Whales. Females with calves are often observed in the Sea of Cortez, with some of these sightings being right here in Cabo San Lucas!

Blue Whales are normally very solitary creatures, although large aggregations have been seen in summer feeding grounds, where there is great abundance of krill, their primary food source. These animals are filter feeders which take in large quantities of water and zoo plankton, and then use their baleen to siphon out the water, leaving only food. Although these animals regularly feed at depths of several hundred feet, surface feeding has been observed. When feeding, the Blue Whale can remain submerged between 8-15 minutes and dive to depths up to 1,000 feet in search of food. Daily these whales can eat up to 5 tons in a single day, that’s almost as much as eating a Tyrannosaurus Rex everyday!

Blue Whales are thought to reach sexual maturity between 5-15 years of age. Females give birth in winter, every 2-3 years, and the gestation period is 10-11 months. At birth, calves can be over 20 feet long and weigh 3 tons. Over the 7 month weaning process, Blue Whale calves will gain an average of over 200 lbs a day and grow up to 50 feet in length. These whales are thought to have a life span anywhere between 60-110 years, making them one of the oldest living mammals on the planet.

Like Humpback Whales, Blue Whales are very vocal creatures, producing songs which can last up to 2 minutes and continue repeating for several hours. Most of these vocalizations occur at very low frequencies >20 Hz, these sounds can travel further than audible sounds, allowing whales to communicate at distances up to 50 miles! The blue whale is also the loudest animal on Earth, with sounds as loud as 188 decibels, which is even louder than a shotgun blast! These sounds are thought to be contact calls, while those which are repeated are thought to be songs. Scientists believe these songs are population specific and can be used to monitor migration routes and population ranges.